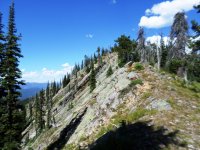 Description: This complex of trails provides access into and through the west arm of the Salmo-Priest Wilderness Area. These are difficult but spectacular hikes. Summer brings a profusion of flowers and berries but also Grizzly Bears. These trails are only lightly used. Check in at the Sullivan Lake Ranger Station for trail closures and other advice.[read more=”Read more” less=”Read less”]

The Colville National Forest says of the Salmo-Priest Wilderness: “Tucked among the Selkirk Mountains in the extreme northeastern corner of Washington, the U-shaped 43,348 acre Salmo-Priest Wilderness extends its borders along those of Idaho and British Columbia. Its most prominent features are two very long ridges, generally running southwest to northeast, connected near their northern ends by a ridge crowned by 6,828-foot Salmo Mountain. The eastern ridge stands lower, more wooded, more rounded off and more accessible than the steep-sided, rocky-crested western ridge. Streams have cut deep drainages into both ridges. Water from the eastern side of the eastern ridge ends up in Idaho’s Priest River. The remaining wilderness drains generally westerly via Sullivan Creek and the Salmo River into the Pend Oreille River.

The Shedroof Divide Trail, the longest path in the area at 21.8 miles, follows the extent of the eastern ridge through open timber and subalpine meadows. It traverses several miles of non-wilderness ridgeline into Idaho, where another 17,585 acres of roadless terrain has been proposed for addition to the Salmo-Priest. The 7.8-mile Crowell Ridge Trail traces the narrower western ridge, offering splendid overviews of trailless backcountry to the north. Several other feeder trails ascend drainages to interconnect the two primary ridge trails.”[/read]

Know Before You Go